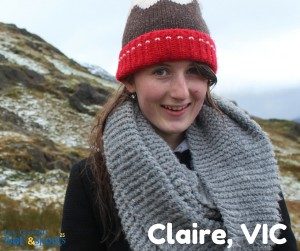 Where did you first hear about Dr Jane Goodall, and what does she mean to you now as part of the NYLC?

I first heard about Jane Goodall when I was studying year 10 environmental science and we went on an excursion to see her speak in Geelong. Now that I’m older, I not only view her as an incredible scientist, but I view her as a pioneer- she was really the first woman who went out and worked in an animal related field, and so much of what we know today is due to her. Now she is an inspiration to me, a girl who wants to actively be involved in conservation science and who wants to be involved in elephant reproduction, a field in which limited girls have been involved in before.

Do you have any advice on how approach becoming an active part of Roots & Shoots Australia?

If there aren’t any Roots and shoots groups in your area, create your own! Start small with projects, and as you begin to gain momentum begin bigger ones. There best way to engage your community is to ask your local council about any events you can have a presence at, and being present, as well as actively using social media to engage with supporters, as it can allow a large following of people.